From Sharpfin
Jump to navigation Jump to search

This page describes how to open the AE radio. Most is easy, but take care when removing or connecting the flatcable, this is a fragile part of the radio's guts.

OPENING YOUR RADIO IS AT YOUR OWN RISK!! 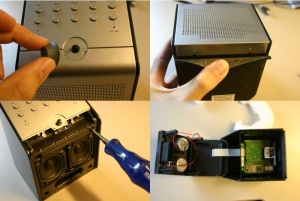 (Not part of the sharpfin project, but documented here because a lot of people experience this problem)

The AE radio has a nasty hardware 'bug' causing a crackling noise in the sound, caused by the wifi module inside the radio. Some unit have a louder crackle then others, but all AE radios I tried were noise to some extend. If your radio is crackling, you could try the following procedure.

This might, or might not, solve your problem, but it did for me on 3 different AE radios.

If your radio get's stuck in a endless loop of initialising the network or generally seems to loose connection to your WLAN quite often, even if the radio reception is good, this might be caused by some neighbouring 802.11n router affecting the built-in WLAN module.

Here is an article on Replacing the internal WLAN module, which fixes this problem.